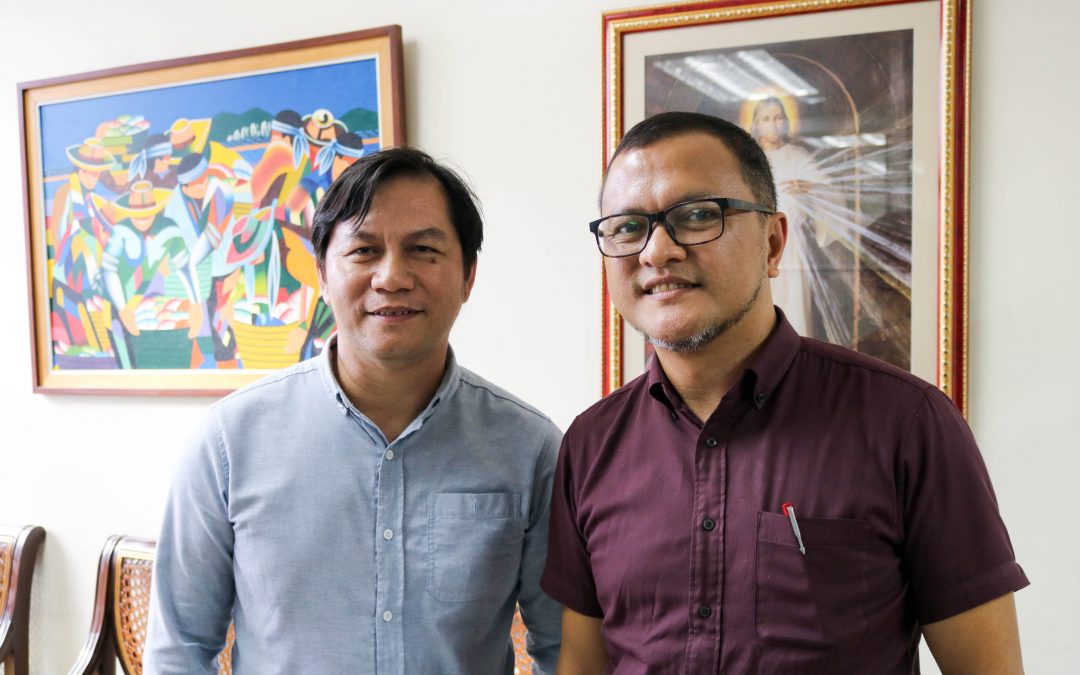 An academic success more than 4 decades in the making, Jun Impas' name circulated across the social media when he revealed in his posted photos that he finished college at the age of 49. An extraordinary but, as he proved it, not impossible feat, Mr. Impas' journey to finally getting his defree is as vibrant and arduous as his masterpieces - with just as much strokes, twists, and turns as the events of his life.

The sixth of ten children, Florentino "Jun" G. Impas Jr. was born to a hardworking fisherman and a loving housewife on 1970 in Danao City, Cebu. At a young age, Mr. Impas accomplished a lot - started drawing at the age of seven, transferred to his grandfather's place in Surigao and supported himself through high school to college.

Through his hard work and persistence to look out for himself and finish his studies, Mr. Impas went through different types of labor jobs to support himself. Then and now, he considers his independence and his capability to stand on his own as some of the traits that made him the successful man he is now.

As he started his family in 1993, Mr. Impas partnered with his third brother in his printing business in order to provide for them - assisting him in jobs where he needed support, painting movie billboards, and creating different types of masterpieces required from him.

In the end, however, his passion and love for the arts surpassed the stability of the business - he then decided to leave his job to pursue a career in painting. But as luck would have it, Mr. Impas isn't one of those who were fortunate enough to succeed on the first try, his spirit was deterred when on his first exhibit, he didn't get the reaction he had anticipated.

With the heaviness of failure burdening him, Mr. Impas questioned the Lord's plans for him, shouting his woes and pain in an empty place in the hopes of feeling better. At that point, he felt like his dream of being successful in his chosen field was coming to an end.

He was determined, however, and decided to look for the positive side of everything that has happened, the things he might have missed out and past the defeat he just experienced - practicing as hard as he can to improve his works and make people appreciate them more.

The strength and guidance from the Lord to pursue his field came from a sermon of a priest - a story of the eagle who was mistakenly put in a chicken's nest when he was an egg, grew up thinking he was one of them, and then one day discovered that he was an eagle after almost falling. The priest compared the tale to the life of most people surrounded by an impoverished community, thinking of themselves as the same not knowing that the Creator has gifted them with talents and grace that could make their lives better.

With this story in mind, Mr. Impas' spirits were lifted, completely changing the stigma imprinted in his mind that only those who have finished their studies have the right to be prosperous. With a renewed vigor, he decided to create a portrait of his wife, which he displayed in an exhibit - a wise judgment that paved the way for start of his achievement as a painter.

The Beginning of a Success

A member of an influential family saw his painting of his wife and requested that Mr. Impas do a creation of him, which soon turned to paiting most of the members of the family. This small victory gave him the privilege of making a portrait for the 75th birthday of the late Cardinal Ricardo Vidal, who saw his works from the same household and took an immediate liking to them.

The unveiling of his work was the beginning of the influx of works for Mr. Impas. The patrons who saw Cardinal Vidal's portrait started asking him to create one for them.

Years later, he decided to try his luck in Manila after winning the Petron Art competition. His journey to the capital was not an easy one, problems regarding his financial resources, housing, a place for exhibits and such, arouse. But these did not dampen his spirits, he continued working hard and persisted for years until he was able to score a one-man exhibit, which featured paintings of important people like Winston Garcia and former Chieft Justice Renato Corona.

His grit and perseverance started paying off, with all types of influential people investing in his artworks. He even went as far as going to Rome to paint the Red Pope, Cardinal Fernando Filoni, and the United Stated for an exhibit in the Field Museum.

Journey in the University of Santo Tomas

As a father of four, his main focus was the education and the welfare of his children who were all studying in prestigious schools. A phone call from a client, however, gave him the wonderful opportunity to continue his studies here in our university.

The Dean of the College of Fine Arts and Design and the Rector at that time saw his works and became interested with him and his degree. Offered a chance to continue his studies, his first reaction was to decline, seeing that he was a full-time artist and was also busy caring for his family.

Admittedly, despite the special curriculum especially made for him, Mr. Impas was still reluctant in accepting the offer; but with his fighting spirit, he managed to finish two years before he almost gave up again due to pressure and the lack of time. The support of his family and the college itself pushed him to finish the degree.

Another hurdle presented itself in the face of his thesis. Seeing his classmates lose themselves in the hardship of creating theirs, he gave his all in making his - even going as far as not extending a one-man show in order to finish.

Choosing the Nazareno and the movement and struggle of the devotees as the theme of his work, he fought tooth and nail to take pictures of the image of the Nazareno as it paraded on its feast day. His dedication brought him on top of a waiting shed in Lawton, hungry, tired, and taking photos of the happenings that would soon inspire his paintings for his thesis.

Just as everything in his life, all his hard work had paid off, receiving the Thesis Merit Award from the college. The finishing of his thesis signified the conclusion of his college life - an excitement that reminded him of the days when they were renting togas, now he gets to wear one.

Througout his entire life, he has done nothing but trust the plans of the Lord for him. Wherever He steers Mr. Impas' life direction, he follows; and the success he has now, attributes to Him. He also saw his lack of education before as gift without which he wouldn't exert as much effort as he did if he has the comfort and stability of diploma - boxing him in an idea of just relying on it.

Admittedly, he discouraged his children from pursuing the arts; however, unbeknownst to him, his children still did, opening a realization for him that being an artist is never-ending, can be pursued at any moment and has no strict guidelines to it.

In the end, despite him being a seasoned student, he still dreams of finishing his studies, and some of the advice he has given to those surrounding him was to continue pursuing the things that they want and to always utilize the opportunities given their way.
Previous
Christmas, Through the Eyes of God Next
Rector's Cup III: Turnover Ceremony